The NBA has instituted a rule that prohibits players from wearing headbands upside down.

Yeah. They have that much time.

Can you name one player that you've seen wearing a headband upside down? I couldn't. I never even noticed. The NBA logo is very small on a headband and it is especially hard to discern which way the logo is pointed when players are running around on the court.

I can't get into the new and "improved" Rasheed Wallace rules, because they're stupid and will ruin a number of NBA games this year.

But this rule? David Stern, as has been pointed out on the blog a number of times, has lost his touch.  He's gone from the guy who helped save the NBA to a clueless moron who is slowly but surely ruining the NBA.

Even The Logo is mad about this one.
Posted by Jake MacDonald at 9:23 AM 6 comments:

It Ain't All Rainbows And Sunshine in Miami

So which way would you bet?

Does the fact that Deadzo is all over Miami's prink affect your decision?

It does for me.  I would be rooting against them anyways, but now that Deadzo has given them his "blessing" I don't see how it makes any kind of sense to bet on Miami winning a title. At least not this season - maybe ever based on the kind of luck McFail spreads.

It's too bad that's the only kool-aid he's chugging. Where's Jim Jones when you need him? 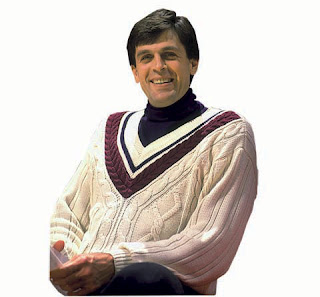 "Hey, do you guys like my sweater?"
Posted by Jake MacDonald at 8:35 AM No comments:

How pained David Stern must be at this moment. The fact that truth - not always likable, not what he wants to say - had to come from that smelly mouth of his...it's unreal. Yet there he was, with two points.

1. He tried to tell owners what to pay players - specifically, less. Economic adjustments of which they are aware.

The league wants teams in the "best available markets." Now, there's no definition to that phrase: certainly David would not provide you with one. A large market that supports a basketball team is one thing...a team simply in a large market is another. Let's not confuse the two. Would fewer teams help the NBA's bottom line? At first...but then you're hoping the rest keep things afloat. Knowing his expansion history, if teams are contracted...once things get better, he'll want expansion yet again.

There isn't enough talent to fill 24 teams, let alone the 30. Combine that with how teams are run, and it gives you a good indication of who might be first to go. Forbes updated valuation list won't arrive until December, but here's the most recent stats:

At the end of last year, both Memphis and Sacramento posted the largest yearly decline in value. Sacramento won't build the Maloof Brothers (who, you know, are poor) a new arena. California is flat fucking broke. That view certainly won't change in the state capitol. Memphis has a new arena. For Memphis, they currently post more debt than value, which is no way to run a business. That happens when you generate the lowest amount of revenue of any team. Memphis might complain of market size, but then you'd have to think: what the FUCK are they doing there if the market is "small?"

Despite a positive uptick in value, Portland posted the largest fall in operating income. History shows us that the area will support the team when it's not filled with Failblazers...and you can't say they were treated to sterling moves over the last 10 years.

Indiana might be "basketball crazy" but one thing they DO have is options. If you're a basketball fan, and you don't care what kind of basketball, why not save a few bucks? The Pacers have found this out before, and a telethon might not save them this time...continued decreases in value and income don't leave a lot of options in the Midwest economics of today.

Dallas has a wealthy, business savvy, batshit crazy owner. He hates Stern, which is entertaining. He's also posting the 2nd largest income slides of the league. Mark makes deals...don't think acing this team (he's already made PLENTY off the deal, and will if he sells whenever) hasn't crossed his mind. Plug in a mumbling know-nothing owner taking his place, and you might have David lamenting that basketball in Dallas "doesn't work" because "it's a football state." Houston is making good sugar and San Antonio is doing its thing, so he might remind everyone of that to "soften the blow." After all, people in Seattle now must root for Portland...right, David?

Speaking of...the Wolves have falling value and income, but their debt is relatively low. So is their revenue. A few more years of "the same" and...wait a minute. In my lifetime, the Wolves were already to have moved to New Orleans...would more turmoil of such affairs (moving/contraction) be any surprise?

The future for the NBA is lean and mean. If regular folk can't afford to go to a game, let alone any kind of ticket plan, that Sixers/Pacers match-up (which is on TV at the bar) is an attraction to no one. Is David finally realizing this? Hard to say - he always seemed like the kind of guy to throw away his shoes instead of cleaning up the shit in the yard.
Posted by Trip Darvez at 4:46 PM No comments: