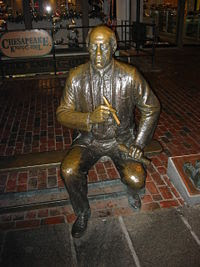 On the eve of the hour that the Dallas Mavericks fired Avery Johnson for his "inability" to get out from underneath a bad trade - er I mean out of the first round of the playoffs for the second consecutive year, it seems that there are a number of coaches that are on the chopping block - Mike D'antoni in Phoenix and, very quietly, Sam Mitchell in Toronto.

Know what those guys all have in common?

Jeez, these guys were all considered the best of the best not all that long ago, and now they're all going to be in the unemployment line. That's a pretty big swing in a couple years.

Curious. So is the NBA COY the new Madden curse? Take a look at the list below and I'll let you decide.


Maybe there's something to, maybe there isn't. It's still an interesting pheonomenon.

Personally, I think it's Red's way of getting back at the NBA for putting his name on such a stupid looking trophy.
Posted by Jake MacDonald at 3:13 PM 2 comments:

I Wish I Had The Words

Email ThisBlogThis!Share to TwitterShare to FacebookShare to Pinterest
Labels: Starship

Congrats to KG on his Defensive Player of the Year award.

Cheers to your continued success sir!

As any avid reader of this blog can tell you, I have not been following the NBA this season. I was flipping through the channels tonight and found Game 1 of Hawks/Celtics. I concluded a few things instantly:
A. KG did well for his new team
B. I assumed the Celtics were the #1 seed
C. The Hawks must be the #8 seed
D. The Hawks made the playoffs?!
E. The East hasn't changed

Oh, it gets better. There was a player for Atlanta, with a mohawk, named West (not Doug, though). Someone named Rondo might be 14 years old. Big Baby! Nice pick by Boston.

All that is great and dandy, but one thing blew my mind. When did Admiral Big Ball Dance join the Celtics? I . . . I didn't get that memo. Seriously? Just once . . . once, I hope to see him hit that jumper to put the game out of reach . . . then a dance.