Wow, should we just hire Barkley and get it over with?

So Rambis and Kahn! have gone and stuck it in McFail's ear again, this time by hiring ANOTHER former foe - Bill Laimbeer - as an assistant coach. Oh, and Reggie Theus.

Assistant coaches really don't matter in the grand scheme of things (as we all know cough*SidneyLowe*cough) so this is, I think, purely a "name" move. Laimbeer wants to coach in the NBA one day, obviously, so this is the first step towards that (and Rambis would also like to coach in the NBA some day, too, but for now, he has to coach our NBDL team).

About the only thing I have to go on about Laimbeer is from his playing days, so it's not worth discussing. I will say that he coached championships in Detroit - granted it was with the WNBA, but still - and that's always a Good Thing. As Laettner will tell you, winners are important. And when you're going around the locker room and pointing to all the other stalls and saying "Loser, loser, loser", well, the more you can point to and say "winner" (as he did when he pointed at himself), the better.

I read this today and got a good bit of entertainment out of it. First off, who gets their Twitter ID tattoed on their body? It gets better. The tattoo is actually his old Twitter ID, that he was forced to shut down awhile back - presumably by his employer, the Miami Heat - in the interest of preserving his image. Of course he posted the picture on his new Twitter page, which has since been shut down to, once again, try to preserve his image. Here's the picture, and a recap of the happenings of B-Easy today.

I hope rehab does him well and forces him to grow up a bit. I can't pick on him for being depressed because that is a serious problem. And I can't pick on the guy for what he does by himself behind closed doors. But son, if you're going to take a picture of yourself and put it on the Internet, FOR GOD SAKES MAKE SURE YOUR WEED IS NOT IN THE PICTURE. That's just plain stupid - and that's something I can give him a hard time about. That and the stupidity of his tattoo.
Posted by Jake MacDonald at 2:54 PM No comments:

Raise your hand if you want to kiss Kahn

His second letter to Timberwolves' fans.

Our previous GM couldn't spell words correctly, ergo he could not form complete sentences, ergo he never wrote a letter to fans, ever. Instead, he would pick up a carafe of freshly-made coffee, say 3 words about being a "players' coach", and proceed to dump the entire contents down the front of his pants.

Then he would walk around all day like that, looking as though he had peed in his pants. Nobody would say anything to him, because it was normal. We were all used to the incompetence.

We haven't had intelligent leadership on this team since.... EVER.
Posted by Drew Boatman at 4:59 PM No comments:

The final middle finger to McFail

Deadzo, you have been vanquished.

The last of "your guys" is gone, gone, back back, to Cali Cali. The new coach was your infamous rival, as evidenced by the picture below. Jaric, Hudson, Mike James, Ndudi, and many, many more are all gone. In fact, only Gomes and Al Jeff remind us of KG, and Love is your only draft pick. The other one you took last year, the second rounder? He's on the roster in Miami. You sold him.

But that's it, buddy. You have been successfully excised from the team like a cancerous cyst. The surrounding skin will only grow stronger.

I am sure in my life I will both praise and curse Kahn! in various amounts, but for right now, for his early moves, he couldn't be doing better if he went and traded for KG back his damn self. What I mean is, he is cutting out all of the horrible moves that McFail made, he is remaking the roster in a different direction (one that remains to be seen exactly where it will go, but still), he is MAKING US FORGET MCFUCKO. Honestly, every trade, every signing, every little thing that is done with competence is such a lovely surprise. Such a treat to read articles where he's explaining things that make sense in basketball language, unlike McFailer, who would come out after making a terrible trade and say "we're not done yet". WELL YES YOU ARE NOW, DUMB DUMBY.

Telfair for Q? WHAT. EVER. How're we supposed to know how that plays out? Kahn! is going at this thing like a gin player, going after all the angles and seeing what pans out. Who can have any idea what the roster is going to look like in 2 months? 2 days? Al Jeff is the only safe one... you think Kahn! hasn't thought long and hard about getting value for Love? There are so many Dumb GMs out there, they would give up top dollar because he's young, cheap and can rebound and grow a weirdo beard. Kahn! knows this.

He knows a lot. He's smart. Like he should be. That's his job.

Kevin McHale doesn't live here anymore. I hope he never is involved with any team I follow ever again. I hope to never see his living face ever again. I hope every player he ever had a hand in drafting or acquiring is traded for better players. Because his tenure with the Wolves was defined by utter failure.

That failure is over. The red sun dawns on a bright future.

Email ThisBlogThis!Share to TwitterShare to FacebookShare to Pinterest
Labels: i can cheer for this team again because they do not employ a corpse to run the show, Kahn, McFail

What Goes Around Comes Around? 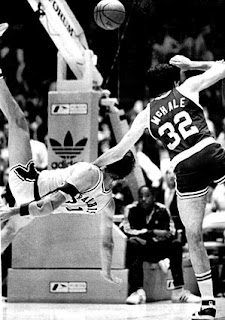 Here's hoping so!
Posted by Jake MacDonald at 8:27 AM No comments: