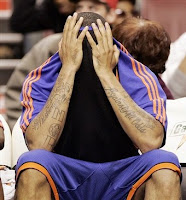 I know there aren't a lot of mathletes that read this here blog, but that's 50 points. That's how many LESS points the Knicks scored than the Mavs did. Yeah.

The Wolves got screwed last night and screwed themselves tonight. Sure Corey Brewer scored 18 points, Kevin Love had a double-double, and Jonny Flynn scored 20. That all added up to -30 for the Wolves on the scoreboard. Awesome. After watching them NOT play defense with 5 seconds left last night, seeing the Wolves down 30 with less than a minute left tonight was not surprising. Disappointing, but not surprising. I dislike watching the kids get killed but it'll happen from time to time. Oh well, they're not going to set a NEW record for futility in the NBA and I'm still happy we're not the Nets...

Why hasn't he played? Seriously. Sure, Ryan Gomes is a solid SF and Corey Brewer was the #7 pick a couple years back, but really. Is there not room for a 6-7 205 wing player who did some damage as a college player to get at least a FEW minutes here and there? He's better than Damien Wilkens - or rather, I'd rather see him get a shot at being a pro player than watching the nephew of Dominique get repeated chances to show us he's not 'Nique - or Gerald for that matter. Especially since we know Damien ain't part of the future - for sure.

I happened to catch some Big Ten conference play today and while I was let down by my Gophers, Michigan State showed me they're not any good either. Frankly, they're the Tom Brady of College basketball - whatever call CAN go there way, does. Fuck em, they'll break someones heart in March, and it won't be mine. If the Gophers had one person who could score at will even 1/3 of the time, they'd be 5-2 in conference play and probably be ranked in the top-25 come Monday. Well they don't, and I'm not holding my breath. God love Tubby, but his team just isn't there yet.

I also caught the OSU-WVU game. Ohio State isn't all that good, but man, Evan Turner is. He tops my wish list for future Timberwolves. The guy does everything and plays with a certain swagger that tells me the kid will make it at the next level - I'm thinking Michael Finley for his career.

Texas is the real deal. Or so they showed in the first half. They're going to be dangerous come tourney time. Two solid guards and a fat guy who scores and rebounds. That being said, UConn is ghetto and full of scary athletes. I saw Stanley Robinson - yeah I DARE you to call him Stanley - jump and grab a oop that was too high to be CONSIDERED a good pass, and stuff it home. Not to mention Dyson, who just WANTS you to bet against him - do it Potsy, I DARE you. I'll win. Trust me. Jim Calhoun or not, the Huskies are going the be an Elite 8 team - at least. I expect we could see this game again in late March or early April.
Posted by Jake MacDonald at 9:54 PM 1 comment: