Deals Week in the NBA 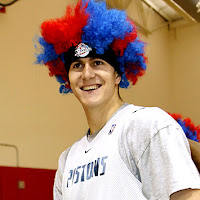 The NBA trade deadline usually starts with wild speculation about which big names are going to trade cities and usually end with a couple trades like the deal the Wolves pulled the trigger on this year.

Sometimes though, all the speculation ends up coming to fruition.

The three-way contract orgy between Houston, Sacramento, and New York was a bit rediculous. Everyone seems to like the deal for Houston, with the focus being on how good Kevin Martin will be when Yao returns from injury. That's assuming he does return from injury. When Yao first went down (this time anyway) there was talk that he was going to retire due to the severity of the injury. Of course, they're right: If Yao Ming comes back healthy, Martin will be a very dangerous weapon for the Rockets. That's still a pretty BIG if. Not to mention the fact that Kevin Martin makes Ray Allen money, especially for a guy who isn't nearly as good as Ray Allen (was). If only they'd found a way to get Amar'e from Phoenix too. Ming-Stoudemire-Ariza-Martin-Brooks would be a pretty sick starting 5.

The Kings got Carl Landry whom they apparently love, so good for them I guess. The best part of this deal for them is that the shed the Kevin Martin contract and free up Tyreke Evans to be their team. For their sake, I hope they can sign a mid-level free agent to continue their rebuilding, although that's hard for me to say since there's still a bit of hatred left over from the playoff battles oh so long ago.

The Knicks, on the otherhand, have done what they set out to do three years ago: get enough cap room to sign LeBron and another max-contract guy. Gotta say, while the Knicks paid through the nose for the Isaiah Thomas-era, Donnie Walsh has set them straight. He said he was going to do something, then went out and did it - and it was good for the franchise! Let's not kid ourselves here - T-Mac isn't going to be "reborn" in NYC. He's done, and the Knicks know it.

In a separate, but related deal...

Adding Antawn Jamison to the Cavs just reinforced the fact that the Cavs are the team to beat in the Eastern Conference - by a few thousand miles. Frankly, if they then turn around and re-sign Z, they may become the odds-on favorite to win the NBA Championship. The Lakers are still the team to beat, but Jamison gives the Cavs their answer to Lamar Odom, which is huge. Of course, if they don't get Z back, and Shaq goes down, they'll be ripe for another Orlando beating in the Conference Finals.

Apparently, Doc Rivers and Phil Jackson are upset about the trade that netted the Cavs Antawn Jamison. They are both unhappy about the fact that it appears as though Zydrunas Ilgauskas will rejoin the Cavs after working out a buyout from the Wizards - not that any talks of such a result have been reported.

This coming from one guy who's team was on the recieving end of the Gasol-brothers exhange - and no, you don't get to use the fact that Marc has become a decent player 3 years later as an excuse - and the other from the guy who made a very similar deal - Gary Payton for Antoine Walker, with Payton rejoining the Celts after being bought out by the Hawks.

So basically, if the deal benefits you it's all good, but if it benefits your competition, you're going to complain to the league about how unfair it is? Nice.
Posted by Jake MacDonald at 9:28 AM 2 comments:

Who the F is Chris Jackson!? 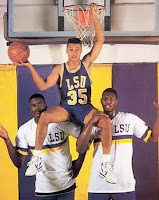 He played most notably for the Denver Nuggets.

He suffers from Tourette syndrome

He changed his name.

Here's a good interview with Mahmoud Abdul-Rauf regarding his NBA career - specifically what happened to it after it became known that he did not stand for the Star-Spangled Banner.

Back when I was a ball boy, he was always really nice to us kids - chatting, playing around, etc. I was sad to see his NBA career end the way it did.
(if you look carefully at the picture, you may recognize both of the big fellas)
Posted by Jake MacDonald at 2:06 PM 1 comment: